How To Sincerely Apologize To Your Wife or Husband (without causing a new fight): The Anatomy Of An Effective Apology 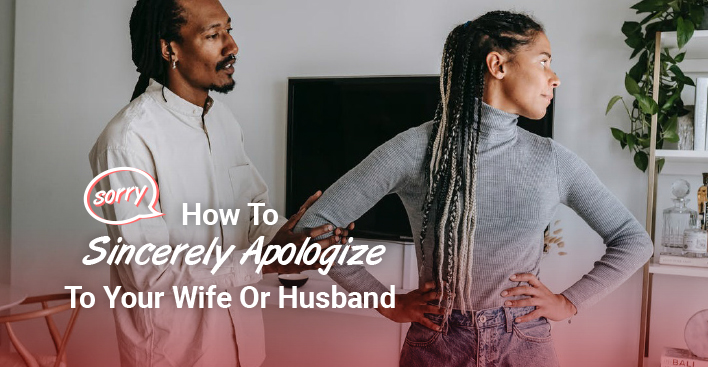 I punched him hard in the face.

Our teacher saw us fighting and sprinted over.

She yelled at us like a howler monkey and forced us to apologize.

That’s the last thing I wanted to do.

Sometimes, even if we sincerely apologize, we mess up because of how we express our apologies.

And that’s exactly what I want to show you:

What to say and, more importantly, what not to say (that’s where most of us f**k up).

The art of a sincere and heartfelt apology is one of the greatest skills you will ever learn.

table of contents
A Genuine Apology Includes 6 Elements (Based On Science):
The #1 thing from the list that makes your apology super effective
The 7 Mistakes People Make Apologizing
1. Expecting forgiveness
2. Apologizing like a politician
3. Explaining your behavior
4. Using the word “but” (avoid it like a kid avoids Broccoli)
5. Forcing accpetance
6. Taking responsibility for something you HAVEN’T done
7. Expecting an apology from your spouse
4 Steps To Sincerely Apologize To Your Spouse: The Apology Template
Step 1 - “I’m sorry + [specific action]”.
Step 2 - Admit your mistake
Step 3 - Make things right
Step 4 - Ask for forgiveness
What Should You Do After Apologizing?

A Genuine Apology Includes 6 Elements (Based On Science): The more elements you include in your apology, the better.

It’s also the most neglected part of an apology:

Taking responsibility for your actions.

Because it’s hard to do.

Responsibility is not about taking the blame.

Getting confused with that idea gets you into a pretty dangerous place.

Being responsible is the ability to shift your internal dialogue to stop looking for reasons why you are the victim.

And instead, ask yourself, “What can I do now?”

A 2016 study on people’s reactions to apologies cited that saying you made a mistake is one of the most important elements of an effective apology.1

Taking responsibility for your actions is the greatest gift you can give yourself. It’s the only way you can change your actions in the future. Apologizing opens the possibility for reconciliation.

However, that doesn’t mean forgiveness is a given.

As the offender, focus on taking responsibility for your actions.

It is not on you to set the terms for how your spouse reacts.

I would like my car to fly and make me breakfast, but that's an unrealistic expectation.

That’s how politicians phrase their sentences.

They signal that you’re not sorry for what you’ve done.

That's what your spouse will hear:

“You are too sensitive.”

It places the fault on your spouse.

It becomes their fault for reacting negatively and putting both of you into this situation.

Saying ‘I’m sorry you feel that way,’ negates the apology and places blame on the other person.

Especially when you believe you have perfectly understandable reasons.

You probably do, I believe you.

But it doesn’t matter.

Because what your aggrieved spouse will hear is that you’re making excuses.

If an apology is followed by an excuse or a reason, it means they will commit the same mistake they just apologized for.

4. Using the word “but” (avoid it like a kid avoids Broccoli)

…is not an apology.

No matter how well you phrased the first half of your apology, following up with “but” will erase all that.

It’s the only thing your spouse will hear and remember.

The word BUT negates or cancels everything that goes before it. It signals that the important part of the sentence is coming up.

Just because you’ve said sorry doesn’t mean everything can return to normal immediately.

It may take time and effort to undo the damage.

It’s not in your control whether your spouse accepts your apology or not.

That’s the way it is.

You cannot force someone to accept an expression of love. You can only offer it. If it is not accepted, you must respect the other person’s decision.

6. Taking responsibility for something you HAVEN’T done

...while you’re strolling on the sidewalk.

And then apologizing to the driver for getting in their way.

Why not also give them the money to repair the damaged car (lol)?

If you didn’t start the fight, you shouldn’t say you did just to patch things up.

The only thing you can do is take responsibility for your part of the conflict.

Only take responsibility for your part of the conflict.

7. Expecting an apology from your spouse

Your wife doesn’t look like Godzilla anymore, about to destroy Tokyo.

“It was not all my fault, and she knows it. All she said was, ‘Thank you. I forgive you.’

It’s just fair if she apologizes as well.”

And you ask her: “Isn’t there something you want to say to me?”

It’s not in your control whether your spouse wants to apologize to you.

The only thing you can control is yourself and your behavior.

Believe me, I know how annoying that is.

But the good news is:

Your actions will influence your spouse over time. They will start to copy you and take responsibility for their actions.

Related: How to Be a Better Husband

4 Steps To Sincerely Apologize To Your Spouse: The Apology Template Every sincere apology starts with these two words and is followed by an action.

It sounds obvious, but you’d be surprised how many people mess up this part.

Be specific about what you did wrong.

Just saying sorry without ever stating exactly what you did will sound like you don’t actually understand how you hurt your spouse.

It shows no empathy.

State what you did was wrong.

It’s much harder to do when you genuinely believe you didn’t do much wrong or had good intentions.

Still, try to identify and admit what caused harm.

If you can’t find the answer yourself, talk to your partner.

Let them know you want to understand their pain.

Approach it with gentleness, not as a confrontation.

“I kept you waiting at home all night while I was out with my friends. I didn’t even call or text you that I would be late. I made you worry and stay up for an unreasonable hour.

If I had been in your place, I would be upset too.”

Apologies are a reparative process.

You have to make amends if you want to maintain your marriage.

Promise to change or do something to regain trust.

It pays to be specific about your solutions.

If you tend to raise your voice and snap at your spouse over tiny things, tell them you’ll take anger management therapy.

If you were late picking them up after work, tell them you’ll be more mindful of your workload.

Doing so holds yourself accountable and gives them more assurance.

If you don’t know what to do, it’s okay to ask them for help to make things right.

“I promise I won’t make the same mistake again. If I’m ever staying out late, I will let you know as soon as possible. If there’s anything else I could do to make up for it, I will do it.”

Once you’ve taken all the previous steps, finish your apology with a request for forgiveness.

The things you’ve done to hurt them have taken away their agency.

You give some of that agency back to them by asking for forgiveness.

It also tells them that you aren’t just assuming forgiveness will be given.

“I hope you can forgive me.”

What Should You Do After Apologizing?

Maybe even shed tears. (You must have screwed up hard.)

Like we tackled earlier, you can’t immediately expect to be forgiven.

It might take a couple of hours, days, maybe even weeks.

Forgiveness is out of your control.

You have opened the door for reconciliation, and that’s important.

However, it’s up to your partner if they want to walk through it.

The only thing you should focus on now is doing what it takes to repair the relationship.

Even if your partner accepts your apology, you still have to rebuild the trust you broke.

No matter how finely crafted, your apology will be meaningless if you don’t work to change to be a better spouse.